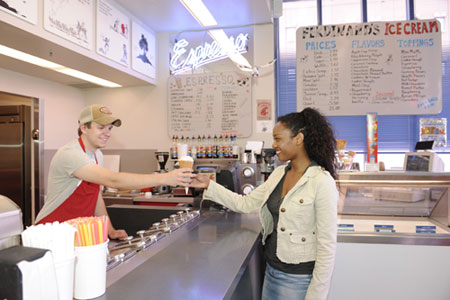 Cheese and Ice Cream for You

Watch Ferdinand’s Ice Cream Being Made from Scratch!

Ferdinand’s is located in the Food Quality Building on the WSU Pullman Campus, 2 blocks east of the New Biotech/Life Sciences building, near the Indoor Practice Facility.

How did Ferdinand’s get its name?

The most popular story is that in 1938, the Washington State College Dairy Products Judging Team was trying to earn money for competitions. There was a student on that team, Rune Goranson, whose middle name happened to be Ferdinand. Also in 1938, the Disney short film “Ferdinand the Bull” was released. All this was too much to ignore and the judging team sold ice cream sundaes to raise funds and named their sales booth “Ferdinand’s”. Ferdinand’s Ice Cream Shoppe opened its doors on September 24, 1948 in Troy Hall and remained there until 1992, before moving to its current location in the Food Quality Building.

Purchasing cheese from the WSU Creamery helps support student employees of Washington State University by providing competitive wages and valuable work experiences. A portion of the revenue from the sale of WSU Creamery products is used for educational support of Food Science students.